What is Saying the Lord's Name in Vain

Last year I got frustrated with my students and ended a sentence with “Jesus!” A student got so mad at me that I had to take him out in the hallway and asked him why.


“You aren’t supposed to use the Lord’s name in vain,” he said.

Do Christians’ believe that saying “Jesus” is against the Ten Commandments? If I say “Jesus”, will a little counter go off in the sky? Minus one for Kronlage; he said Jesus.

I’ve met people who are paranoid about saying “God Damn” because they believe that is saying the Lord’s Name in Vain. Do they believe if they say it enough, it will prevent them from getting into heaven?

So there I was in the hallway wondering what I should say to this angry student. I told him that I didn’t believe that it was wrong to say “Jesus” and if he felt it was wrong, then he should worry about saying it himself, not preventing other people from saying it.

I once heard a Christian say that he was in an airplane and it was going to crash. He said a prayer and miracle of all miracles, the plane didn’t crash. God heard his prayer and saved him because God had plan for him.

That is using the Lord’s name in vain. To be so narcissistic that he believed God saved his life because he prayed is a sin in my opinion. Does God not have a plan for anyone who died plane crash? What about all those praying for diseases to go away only to die? God must not have a plan for them either. To believe that God listens to one prayer is to believe that God denies all the other prayers left unanswered. How can anyone be so vain?

There are 6 billion people on this planet. If God spent one second on each person, it would take 190 years to get through the entire population of the earth if God worked around the clock without a break. To say that God listened to us is using God’s name in vain.

What are prayers for? The person saying the prayer. Nothing more. It helps one realize that we cannot control how things turn out. That there is some force greater than ourselves. But to believe that someone listens to our prayers is self-centered.

I couldn’t tell my student all of that so I let it go in an unsatisfying way. What would you have said?

Are you familar with PABBIS.org?  Check them out and tell me what you think.
Posted by KJ Kron at 7:34 PM No comments:

The Funniest Novel I Ever Read - The Snow Whale by John Minichillo – Maybe, Maybe Not

A rarely laugh out loud when I read a book, so when I found myself doing that while reading the Snow Whale, I started to wonder what were the funniest novels I’ve ever read.


Kurt Vonnegut and Joseph Heller come to mind, but they are both more amusing more than anything. And repetitive. While I like them, I don’t think they wrote the funniest books that I’ve read.

Charles Bukowski was a favorite of mine. I find his conflicts with society to be hilarious, although at times he can be pathetic and sad.

A Prayer for Owen Meany is a book that got me laughing out loud. But the entire book wasn’t that funny. Especially at the end when the narrator gives long sermons about skipping Vietnam, etc.

Which brings me back to the Snow Whale. Yes, it starts out funny. The humdrum of marriage, work, mid-life couldn’t be done any better and I thought that this might be the best comic novel I’ve ever read.

But the book offers so much more. And while there is a “fish out of water” element, it stops being funny, which isn’t a bad thing. Instead of novels that make me laugh, I started thing of Iron John by Robert Bly. In that book, he says that there really aren’t any true rituals or tests that initiate us into manhood. We are left empty feeling like man-children. And that’s exactly what happens to Jacobs. He is a man child on a quest to become a man.

What follows is an amazing journey. There are such tense moments at sea that I forgot that I was laughing at the beginning. No matter. This is a book that starts child-like and comic and grows into a more mature novel offering a lot more than just a few laughs.

So, what are the funniest novels you’ve ever read?

What is Your Favorite Bart Ehrman Book?

A reader asked me which book influenced me the most when writing Saint Peter Killed God. That’s a difficult question. Was she asking about what book on writing helped the most? Or which fiction book? She asked me if I had read a book by Pagels so I knew she was talking about non-fiction books about religion. Historical Jesus, that sort of thing.
Still, it’s is impossible to say where my ideas come from specifically. I can’t point to one book and say, “I got inspired here.” But when it comes to Christian history, Bart Ehrman is my favorite author. He writes in such a way that I feel like I’m just listening to him speaking. His writing is very accessible even when he starts talking about the complex. There are some weakness to reading so many books by one author because he repeats himself here and there. Like he might talk about reading the Bible ‘horizontally” vs. “vertically.” It’s a good point and he uses different examples in each book. Although I like what he says though, I haven’t yet tried it. Well, here are my Ehrman favorites:

1. Early Christianities – I find it fascinating that there were about a half dozen different types of Christianities that sprouted up and only one survived. Ehrman does an excellent job of not only explaining what each gr oup believed, but he also mentions which gospels they primarily read and why they lost out to the orthodox beliefs that Christians have today.

2. The God Problem – I saw Ehrman interviewed on the Cobert Report for this book. Stephen asked him, “Isn’t an agnostic just an atheist without balls?” Ehrman took a second. I almost felt sorry for him, but he came up with a witty response (to bad I forgot what it was). Anyway, this book goes into what the Bible says about suffering, which surprised me (even though I was familiar with it). Much of it contradicted itself and most of it is unsatisfying. What I really like about this book is Ehrman is willing to say that he just can’t be a Christian anymore. Some many writers of Biblical History / Historical Jesus bend over backwards to rationalize Christianity.

3. Misquoting Jesus – This was the first book by Ehrman that I read. Yes, I knew when the printing press was invented, so it makes sense that the Bible was originally copied. Ehrman explains the problems with this and shows how the early copies were possibly manipulated and why.

4. Judas Iscariot – I didn’t think this book would be too interesting when I picked it up, but I was surprised. It is a wonder that as much of the manuscript survived as it did. Ehrman tells us what is in it and why. Entertaining.

5. The New Testament: A Historical Introduction to Early Christian Writings – Yes, this is sad. I liked Bart Ehram’s books so much that I bought his textbook for his class. One problem – much of what he writes here is repeated elsewhere and it is a textbook. Still, I think it’s good.

6. Jesus, Interrupted – This is probably a good place to start. However, I felt like much of it was stuff I already knew and repeated elsewhere. Maybe it was a book I should have read instead of his textbook.

7. Peter, Paul, and Mary – this book will make the top five eventually, but I’ve just started it and unfortunately I don’t have it with me so it might take a while to finish it. I’ve read enough of it to know that I like it as it got me thinking about how Peter is portrayed. I haven’t gotten to Paul or Mary yet so I feel like I shouldn’t even include this book on my list.

Have you read any books by Bart Ehrman? Which are your favorites? Do you disagree with my list? Which ones would you suggest that I read? 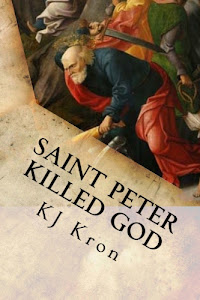